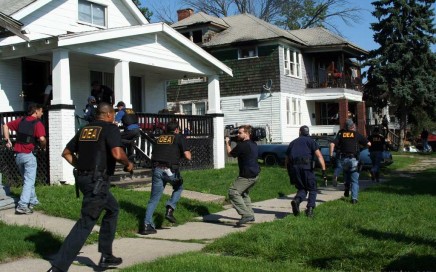 What do you do when the cure is worse than the disease? We talk about the impact on society of the so-called War on Drugs, and the fact that all drug laws are unConstitutional. We also respond to listener feedback and send a shout out to all of our new Facebook fans! The Missing Links […]

As long as the government is going to regulate every aspect of marriage (who can get married, who pays for the kids, etc.), I think Congress should go ahead and eliminate the moral ambiguity of adultery. Sen John Ensign’s comments about his extramarital affair last year highlighted the fact that adultery isn’t technically illegal. Why […]

Whose Fault Is It?

I’ve written before about the War on Your Rights, and how ridiculous its officials appear when they feign outrage at the extreme tactics employed by drug smugglers. The latest to exhibit this righteous indignation is none other than America’s own “Drug Czar.” (I hate that title, but it does at least elicit images of the […]

Lou Dobbs Is An Idiot

I already knew that, and that’s why I usually avoid his missives. In the past, he has drawn attention (and ratings) by making controversial (and xenophobic) statements about the so-called immigration problem. Which, in my experience, is only a “problem” for those who don’t like people whose skin is a different color from their own. […]

No Man Is A Continent

Regarding Jennifer Schwirzer’s article entitled “How Noble Experiments Fail,” I had to make a few comments. First, her argument that our country’s last attempt at prohibition was a miserable failure due partly to lack of enforcement has merit, however, any suggestion that we should try again with greater focus and fervor is reminiscent of socialists […]

When will the powers that be in this country (and the DEA) realize that the so-called War on Drugs is as unwinnable as the Wars on Poverty and/or Terrorism? Did we learn nothing from Prohibition? Are they not aware that banning a substance (something that the Federal Government does not even have the authority to […]

War on your Rights

Not in recent memory has there been a news report that so perfectly illustrated everything that is wrong with the so-called War on Drugs. I just had to share this one. Let us ignore, for the moment, that neither Congress, nor any other legislature, has the authority to ban a substance (without first amending the […]